One of my networking contacts in the food industry, a former chef, was reading this blog and told me to visit Employees Only, a prohibition bar in the West Village of New York City, and that I would not be disappointed. As with all chefs – they know EVERYONE – he is friendly with the GM and told me I could meet him if I stopped in on a Monday. As you know by now, all it takes is a subtle nudge and I am ready to try a new place but it took quite a bit of persuading to get someone to rally with me on a Monday evening. After a lot of persistence, puppy dog eyes, and a promise of a good time, my friend obliged and we arrived around 8pm excited for the night ahead and ready to sample some of their incredibly amazing cocktails.

If you have never been to a prohibition bar, part of the allure is the scavenger hunt to actually find the place! We arrived in front of a small building with a green door and a large green awning showcasing a glowing red sign in the front window that read “Psychic”. Luckily, I had been here once before or I would have been a bit confused as to whether we were at the right place or not, it’s very deceiving. 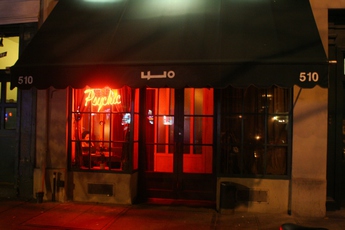 The bouncer took a quick look at our IDs and let us inside a dimly lit hallway where the psychic sat to our left ready and eager to tell us what our future life entailed. To our right we found ourselves face to face with heavy, velvet, deep red curtains. We pushed through and were suddenly greeted by a bustling, upbeat, 1920s themed bar. At 8pm on a windy Monday evening there was not a seat to be had at the bar and the tables in the backroom were all full too (whether its 1920 and illegal or 2017 and legal, everyone loves to go to the bar). The hostess told us she did have a small table available at the bar in the front reserved for us and we quickly sat down. The table included a 1920’s train car bench seat in order for my friend and I to sit next to each other and watch the bar patrons interact in front of us as if we were spectators at a sporting event. There were couples on first dates, couples that seemed as if they had been together for years, impeccably dressed women, others in ripped jeans and t-shirts. The crowd also included flocks of younger men on the prowl, drag queens, gorgeous gay men, stunning cocktail waitresses, and well-dressed older men looking for a younger lady to entertain them. The crowd is the epitome of what it means to be in NYC.

As soon as we sat down someone came over with drink/food menus and some pumpernickel bread accompanied by soft creamy butter with chives that tasted like a much-needed bagel on a Sunday morning. We opened the cocktail menu and found it to be extensive and impressive. Each drink had many intricate ingredients and many of the fruity cocktails came with homemade pureed fruit. It’s easy to see why this bar has been honored with many awards including #4 on Drink International’s “World’s 50 Best Bars” list in 2015. 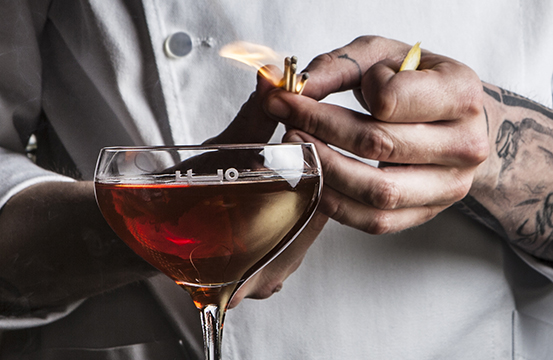 After a thorough analysis of the cocktail menu and deliberating for quite some time, we finally picked two cocktails and a gnocchi dish that sounded appetizing. After receiving our cocktails and the ricotta gnocchi glazed with balsamic vinegar and brown butter, we enjoyed the “show” of people also enjoying the bar. 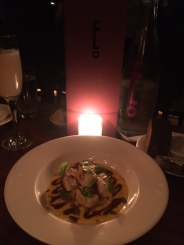 The gnocchi were pan friend and crispy on the outside and then instantly melted in your mouth and the sauce was sweet, creamy and had a nice dash of tang with the balsamic. I soaped up the remaining sauce with the pumpernickel bread along with the few pine nuts they had in the dish. We could have easily eaten 5 of these dishes.

As we sat there, we sipped on Employees Only version of a Bellini, which included, a delightful mix of pureed white peached stirred with prosecco and dashes of peach cordial. We also indulged in their Sanjarita Sunshine – a must try cocktail – featuring a unique blend of vodka shaken with homemade grapefruit cordial, fresh lemon juice, splash of agave nectar, allspice dram and raw egg white over a giant ice cube.

Besides the amazing cocktails, the bar scene has a certain vibe that makes you forget where you really were and what a crazy, hectic, NYC Monday it had been. Maybe it was the 1920s pictures on the walls, the dimly lit candles, the dangling old school lights hanging from the ceiling, the beautiful bar containing whiskeys and cordials from years long gone or the eclectic patrons that make Employees Only such a mesmerizing experience.

As we sat and observed what felt like a television show around us, we suddenly became part of the scene. Two older gentlemen asked, a bit persistently, if they could sit down and chat with us for a bit. One man, dressed in a white track suit along with large DJ headphones was an acupuncturist and a tattoo artist in NYC; he took our invitation to sit down as an opportunity to describe to us how he tattooed every inch of his entire body – welcome to NYC on a Monday night in the Village. The other gentleman was dressed very conservatively and told us a bit about his “medical practice” and his adorable puppy (accompanied with pictures, of course) waiting for him at home. The two of them were a microcosm of the mix of characters that were conversating with one another and drinking at Employees Only that evening.

The GM then popped over to visit our table in his adorable black hat, black vest and colorful tie. He was a jolly, older gentleman, with a white beard and a bright smile; he had that familiar face which makes you feel like you have known him forever. The acupuncturist/tattoo artist and his “medical professional” friend” eventually departed after providing us with tons of material and entertainment. We ordered more cocktails and danced to the Michael Jackson beats and Barry White hits. About an hour later, two younger, attractive, gentleman from Holland stopped us and asked us if we could recommend any other places to visit on their last day in New York. I mentioned some of my favorite museums and restaurants and we talked a bit about New York City and Holland and they left after finishing their drinks. They loved Employees Only and explained they wished there was a bar like it in Holland.

As the night went on, the bar became more and more crowded and we sat people watching and thoroughly enjoying ourselves.

We ended our evening with their Amelia cocktail: a glorious mix of pureed blueberries, fresh lemon juice, vodka, and St. Germaine. To top it all off, we split a wonderful piece of German cholate cake. I must admit, although I did not go out expecting to meet anyone on a Monday evening, I really enjoyed seeing and talking to an interesting mix of friendly people. If you’re looking for a place to chat up some people, enjoy a fabulous Prohibition cocktail and pretend like you’re living in a different era, this is your place. Employees Only is truly the epitome of exactly what makes NYC unique and interesting.