Pujol put Mexico City on the foodie road map when it made Pellegrino’s list of the top 50 restaurants in the world as #20 and as #4 in Latin America’s top 50 restaurants. Attention of the restaurant grew even further when it was featured on the Emmy award winning series, Chef’s Table on Netflix. Everywhere you turn now it seems Mexico City is making its mark on the worldwide food scene. From delicious chocolate mole sauces at restaurants like La Capital in Polanco to the local taco street vendors, it’s easy to find delicious, mind blowing food at reasonable prices. Fortunately for me, a foodie friend of mine from the NYC metro area moved to Mexico City about 10 months ago and dove head first into the restaurant scene the day he arrived, and still hasn’t come up for air. As I drove him insane sending over new restaurant openings via Eater.com, he finally said, Shannon, seriously…why don’t you just come visit? So I did. (Don’t threaten me with a good time!) Here are some places I highly recommend checking out on your next visit to the beautiful capital city of Mexico. (Before we move forward, I suggest you plan on staying in Polanco, the “Beverly Hills” of la cuidad de Mexico. This area is known for its great shopping, upscale malls, high end hotels and amazing restaurants-over 80 total).

La Gruta at Teotihuacan: if you have access to a vehicle, it’s worth taking the hour drive to the pyramids of Teotihuacan for multiple reasons. For many, it’s seeing and climbing thousand-year-old pyramids. For me, it was the promise of eating local, authentic, Mexican cuisine in a ornate, dimly lit, underground cave. (How often do you get to do something like that?!) Anyway, we arrived on a sunny, and pleasantly warm Friday afternoon, parked the car and stood at the top of a ‘cliff’ that showcased the massive cave restaurant. We were then led down the narrow staircase, and seated towards the back of the cave next to a stone carved staircase lit with tea light candles. The whole scene felt very prehistoric and authentically Aztec Mexican. Each wooden table was covered in white linen tablecloth, complete with multicolored wood and straw covered chairs pushed into each table and beautifully decorated clay colored ceramic plates were setup in front of each potential diner. After we sat at our table, the waiter was quick to bring over an assortment of spicy salsas and chips. To start, we ordered the tortilla soup which was unlike anything I have ever eaten before. The pictures give you a general idea, but definitely does not do it justice! The bowl contained tortilla strips, chunks of local cheese, pieces of avocados and dried pig skin. Then the waiter poured a delicious hot, salty, broth on top of it. Muy delicioso! For lunch I had pollo de pipian (pumpkin seed sauce). The pieces of chicken came with lots of sauce in these beautiful ceramic pots with small bowls of black beans and rice on the side. (Very cultural and ethnic). Then we climbed the pyramids hoping to work and ‘sweat off some of the calories’. Wishful thinking my friends. We climbed up once and called it a day!

La Capital: incredible gastronomic food, excellent food presentations, great service, and not terribly expensive; this was one of my favorite restaurants in MC. When we arrived, we ordered a round of drinks to start, then decided to split two appetizers and one entrée. The lychee martini was easily the best lychee martini I ever had. The drink itself had a well-balanced flavor of lychee juice and vodka and was topped off with a nice layer of foam on top. I could have easily had 5. (I stuck with 1, I promise). For dinner we ordered tuna tartare which was wrapped in thinly sliced avocado pieces atop a significant amount of spicy mayo (apparently Mexicans love their sauces!) Then we split the shrimp tacos which came 4 small pieces to a plate, decorated with dollops of spicy aioli and black bean puree. For our entrée, we went with the duck enchiladas swimming in chocolate mole sauce which I highly recommend. Seriously, the four small enchiladas needed a lifesaving best to survive the plate of creamy and hearty mole sauce. Nonetheless, the dish was incredible. It was hard not to lick the plate clean.

Four Seasons hotel: if it’s a Four Seasons, you know it must be spectacular, and the Mexico City location  is no exception. First off, the cocktail menu is a solid 25-page book complete with lots of pictures of unique and amazing alcoholic concoctions. (Every bar needs to have this!) Secondly, the outdoor courtyard area is stunning, and since the weather in Mexico City is almost always perfect, it’s well worth sitting outside on their very comfortable, posh, cushioned seats. If that however, does not tickle your fancy (or you hit rainy season and sitting outside is just not an option), consider grabbing a cocktail indoors on their luxurious couches or at the indoor prohibition style bar. They do a fabulous brunch for $55 from 12-5pm on Sundays which includes a sushi cart, meat cart, salad cart, sandwich station, and one mimosa (or you can pay more for unlimited cocktails). While we were there, we opted to sit out on the patio, drink a few cocktails and just people watch for an hour. The drinks were fantastic and the people were gorgeous! 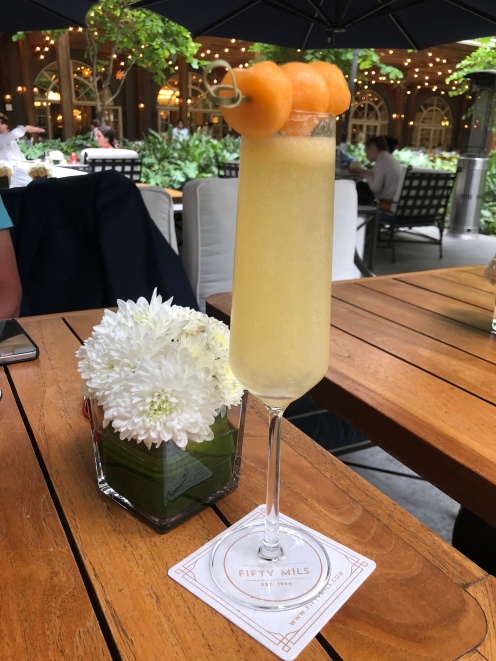 Cerveceria Polanquito: apparently, they are a many Cerveceria’s in Mexico City, but the Polanquito location is unique because while dining here you feel like you’re in the middle of the Amazon jungle. The ceiling is covered in fake tree branches and leaves and there are plants and trees situated all around you. What’s also cool about this place is the number of TVs they have hanging up high amongst the tree branches. In addition to the ambiance, the menu is quite extensive with lots of authentic Mexican options to choose from. We ordered the fish and shrimp tacos as a pre-dinner starter, knowing we had dinner reservations two hours later (the definition of gluttonous right here). Anyway, the shrimp tacos really hit the spot. As stated earlier, Mexicans really love their sauces and the second you order food, they generally bring you a selection of sauces/salsas to add to your dishes. This place gave us three sauces and a ton of limes on the side. (It’s such a shame my pathetic self can’t handle spicy foods! Sad!) The shrimp tacos also came with an avocado mousse which was spectacular! It was light and fluffy and paired well with the crispy shrimp and purple cabbage. 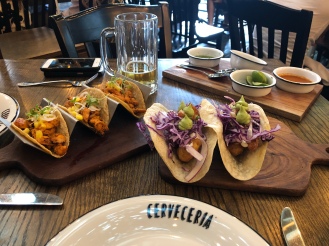 Rosa Negra: two things stand out when it comes to Rosa Negra: one, they greet you with delicious, crispy, warm, cheese stuffed pastry breads sprinkled with parmesan cheese and three dipping sauces; and two, they play upbeat electronic dance music on the weekends along with a live drummer. Between the cheesy bread, the bumping beats, and my glass of Albariño, I was all set. We did however agree, we should probably order something aside from the free ‘pan’. So for dinner we agreed to split the salmon ceviche in a coconut curry sauce and the huarache pulpo (squid). The ceviche came in a bowl made from half of a coconut and had a strong red pepper flavor. The pulpo was the largest and thickest piece of squid I have ever seen! The dish also came with oven roasted potatoes and black olives.

While you’re in Mexico City if you have the time, check out el museo del tequila y el Mezcal (tequila museum). It costs about $3 USD and comes with two small shots of tequila you can redeem at the rooftop bar. It only takes about 15 minutes to walk through, but then you can head up to the rooftop to enjoy your tequila. When we arrived on beautiful, warm and sunny Friday afternoon they had a very talented and gorgeous Columbian woman singing serenading music at the festive and colorful bar, it was blissful. 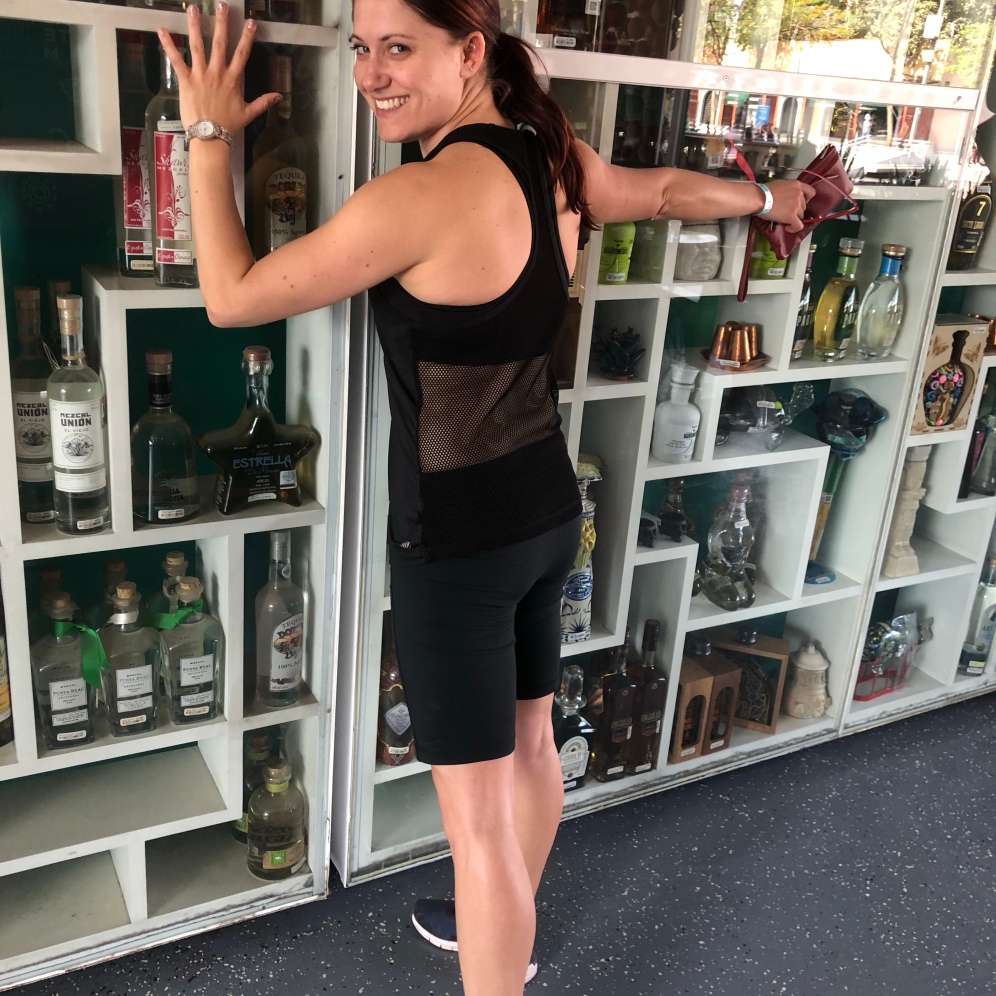 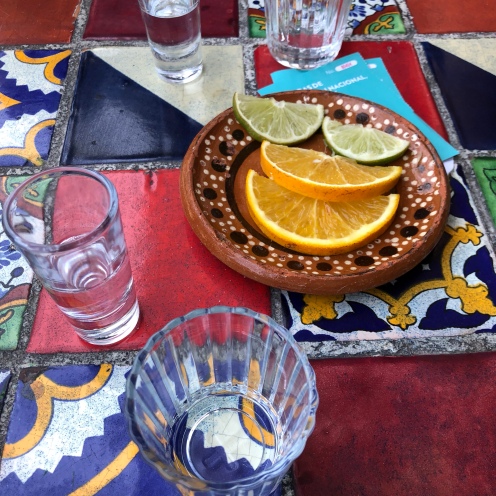 One place I was a bit disappointed in was Jose Andres. The restaurant is inside the W hotel so it has that “W hotel” trendy, upscale, funky feel to it. This location was nothing like Bazaar Mar (his restaurant in Brickell, Miami, FL). Anyway, we sat outside on large, colorful, semi-circular couches overlooking the street below. The menu itself was a bit disappointing. It felt more like a W hotel bar than a Jose Andres restaurant. We went to order paella, but that took 45 minutes, and we didn’t have that much time to spare, so we went with the fish croquettes, chicken and shrimp atop of squid ink pasta. Honestly, the breaded fish croquettes tasted frozen as did the chicken and we were a little peeved the shrimp over squid ink dish came with three shrimps for two people. What the heck is that?! I was still a little hungry after this so we ordered the fennel salad which was nothing spectacular. I must admit, that was a terrible idea, as once we put in an order for that their April-October late day tropical rainstorm hit with a vengeance, with winds gusting, thunder and lightning and wicked rains, so we were forced to go inside. The inside is small, and uneventful, except for the unique ceiling which looks like trees in a fairytale. Having been to Bazaar Mar in Miami twice, I apparently had high expectations. His Mexico City location just didn’t do it.

Have you ever been to Mexico City? Where did you eat? What restaurants and bars do you suggest? I was only here for four days, so I’m sure there’s so much I missed!