Who doesn’t love December? Even if you’re not a Christmas person, the festive bright lights hung everywhere, the smell of pine from the Christmas trees on every corner of New York City, the fun winter cocktails, and Christmas popup bars, the (sometimes obnoxious) Christmas music everywhere…you must admit, as much as you want to hate it, you really can’t!

With that being said, let’s start off the list of December food trends with Eater.com’s fantastic list of holiday pop ups in NYC here. Town and Country Magazine also has a fantastic list here. One place that really pops out is Miracle. Miracle is a Christmas-themed pop-up cocktail bar that serves up fun holiday cocktails in a festive environment. According to its website, the idea was born in 2014 when the owner, Greg Boehm, decided to halt construction on his East Village cocktail bar and instead turned the space into a pop-up bar serving holiday themed drinks in a Christmas themed setting. The space was so popular, Miracle expanded to four locations, and in 2016 it went global, with locations in Greece, Montreal, and Paris. This year, Miracle has 80 locations all over the USA, Canada, London, and surprisingly New Zealand! Another spot you really need to check out is the Arlo hotel in Soho. Just recently took a visit here and was amazed at how the hotel really turned into a winter wonderland. The outside space has see-through igloos with different things going on in each igloo. One igloo had a fortune teller, the other had samples of whiskey and Old-Fashioned cocktails, and the third one had Santa Clause and a small elf available for picture taking. In addition to that, snow blows from above, there’s an outdoor fire pit, and there’s a giant abominable snowman walking about. Upstairs they have a room decked out in colorful Christmas lights with the yule log playing on every tv. It’s quite the scene! Please let me know if you’ve checked out any holiday bars and what your thoughts were! 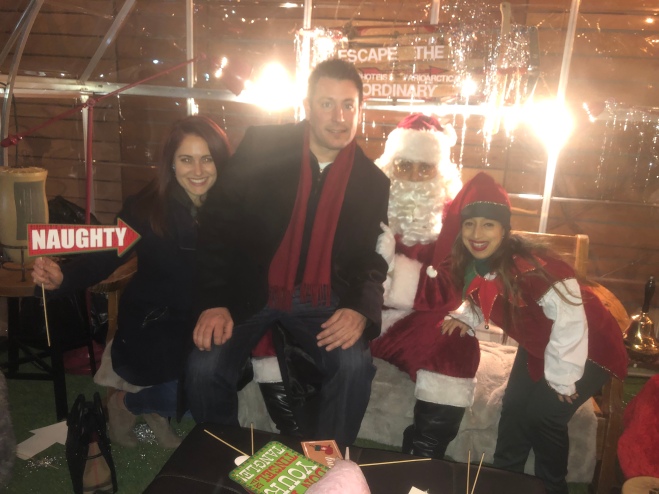 Plant based products continue to rise in popularity:

Shama Lee, the co-founder of Sunfed Meats, a New Zealand vegan meat company that makes vegan bacon and chicken from peas, recently raised $10 million for the brand’s expansion into Australia and beyond. More here. A New Zealand vegan burger made from peas…hmmm so what’s NZ supposed to do with all those cows and sheep they have if everyone turns into a vegan?

The future of dining…?

In a fast-paced world, we live in these days, we’re all getting used to hearing ‘fast and casual’ and ‘same day delivery’ and ‘ready in 10 minutes or less’, so it’s odd to read about a Danish chef who plans on preparing a 50-course dinner that may stretch as long as six hours! Apparently, there will be four kitchens, 30 chefs, and seven dining spaces. Crazy! The dinner will be multithemed, starting with an experience room and an introductory theme of New York. After that guests will move on to a planetarium-style ceiling in the main dining room and a LGBTQ theme for the first course in the desert room using a seahorse to explore same-sex partnership patterns. Oh my, I wonder, how many Instagram stories could one make from a six-hour dinner? (Probably more than anyone needs to see). More here.

Slightly different from a 50-course sensory based, gastronomic restaurant in Sweden…a few chefs in the United States have explored the use of marijuana in their cooking. In fact, a few chefs in the 10 states and the District of Columbia, where marijuana is now legal for recreational consumption, have thrown pot laced dinners. According to this Restaurant News article, the meals are generally held offsite, the edible marijuana products are provided by staff from licenses dispensaries, and guests have to add it themselves.

Meanwhile, over the pond…Brighton, England has welcomed its first cannabis-infused restaurant, The Canna Kitchen, which offers diners a vegetarian and vegan menu infused with CBD compounds, commonly used for medicinal purposes. Their mission is to change the way people think about the cannabis plant by creating beautiful vegetarian dishes infused with the plant. CBD contains no psychoactive side, but instead has pain-relieving therapeutic benefits. Check out the restaurant’s site here. Speaking of which, someone is headed to a dinner party in New York City next week where the chef is using CBD in his food prep. I will keep you all posted on how it goes!

Foraging: (over the river and through the woods, to fine end dining we go…)

Connecting with the land through food is influencing everyone from fine dining chefs to home cooking. Lately people have become very interested in picking their own greens, and the trend is only continuing to grow.

For anyone who’s seen Chef’s Table, this was the theme to many episodes, especially with Peruvian chef, Virgilio Martinez, owner of Central in Lima, Peru from season 3. His restaurant offers customers the entire ecosystem over the course of a tasting menu. Him and his team explore different terrains in search of ingredients that they can use at the restaurant. In fact, according to Virgilio, they use 180 ingredients, and 50 percent of them are unknown. Check out a recap of the episode on Eater.com here. Really though, you should just watch the episode, it’s fantastic!

An online resource and app that lets people share where they have found sources of wild food across the globe. On the website you can discover plants around you, learn about useful, edible and medicinal plants, share local information on useful plans and connect with fellow plant lovers. Check out the site here.

For those of us who don’t live anywhere near greenery, check out companies like Square Roots,  a seed to sales urban vertical farm company, connecting people in cities to local, fresh and flavorful herbs. Suddenly becoming a farmer is cool again, who would have though! Check out their yearlong next-gen farmer training program that puts participants at the forefront of the indoor farming industry. Indoor farming is certainly the future, that’s for sure…

Can you imagine the idea that one day you’ll go into stores, whether they be grocery or retail and not a single person will be working there? It’s a crazy thought, but we may be headed in that direction…

When Amazon pioneers a concept, its likely Walmart will be quick to follow suit. Its newest concept ‘Sam’s Club Now’ is testing out concepts such as mobile checkout, an Amazon Go camera system for inventory management, electronic shelf labels, wayfinding technology for in-store navigation, augmented reality, and artificial intelligence-infused shopping, amongst other techie things. Once a customer has finished shopping they present a bar code to a Sam’s Club Now employee who scans it to complete their purchase. I’m sure Walmart is happy they don’t have to pay health insurance for all these employees being replaced by technology!

China’s BingoBox is on the move

Amazon Go has been all the rage in the USA lately with its cashless convenience stores utilizing artificial intelligence. China’s response to this has been the creation of BingoBox which already has plans on expanding internationally. This mini Chinese convenience store, carrying between 400 and 800 items, allows customers to enter by scanning a QR code at the door. It has already been installed in more than 300 locations in 30 cities in China. …Because really, who wants to chat with a cashier at 2am when you’re having a cigarettes and Oreo meltdown? 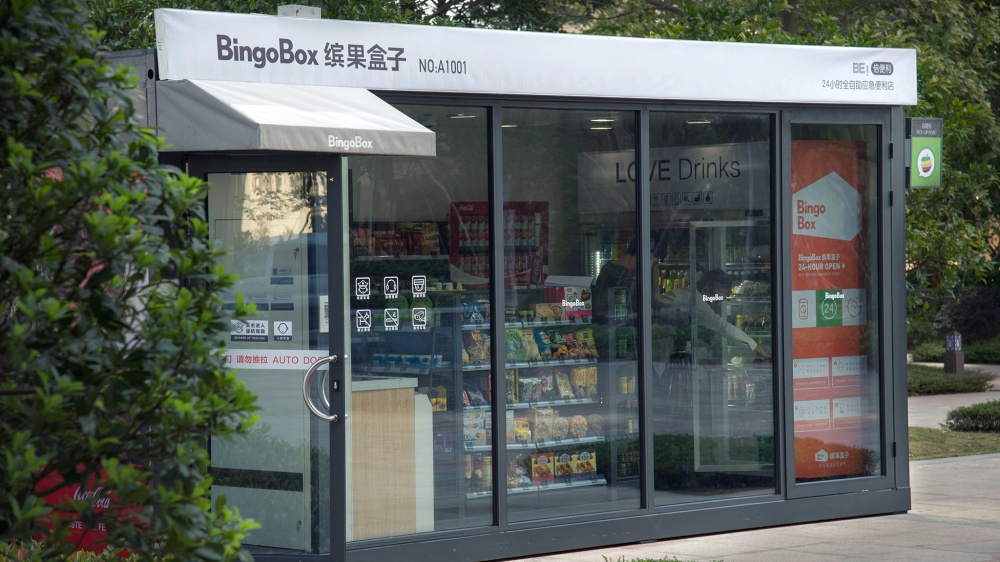 Robotic Café – robots, coming to a café near you

A bit of a unique, touching story coming out of Japan. A new café, Dawn, opened in Tokyo staffed entirely by robot waiters. Interestingly enough…the robots are controlled by paralyzed people from their homes. Although this was a limited run and the café closed on December 7th. However, people were so impressed and inspired by the café that a crowd funding drive was held on a Japanese site and its goal of 1.5 million yen ($13,000) was easily doubled. If support continues, there is hope that a full-fledged Dawn will open in 2020. Link.

The Sydney Fish Market, the biggest fish market in the Southern Hemisphere, is going through a complete renovation that is set to be complete by 2023. The fishing industry is often seen as an aged industry with outdated technology, so it will be interesting to see a fish market with 21st century technology and improved facilities that keep seafood fresh and make it easier to trade. The space will also include restaurants, a boardwalk and a seafood cooking school. Link. I’ve seen seafood market in New York City and Melbourne, Australia and neither one was anything to speak of! I’ll be interesting to see if this trend takes off!

Rounding off 2018 with the top 20 food trends according to the National Restaurant Association: