As noted in my December 2018 Food Trends article, CBD (cannabidiol) is being used in more and more kitchens throughout the country and overseas, and in fact has become a selling point in some eateries. Brighton England finally welcomed its first cannabis infused restaurant, The Canna Kitchen, which offers a vegan menu infused with CBD compounds. At this point you may be asking, what is CBD (either that or you’re saying, pshh I had this stuff years ago, it’s so five years ago). Anyway, it’s the non-THC stuff in marijuana, so it won’t get you high, but it is said to help with relaxation, anxiety relief, pain management, and insomnia related issues. Apparently its completely legal in states like New York and California too. Hipsters rejoice!

One chef who’s well-known for his use of CBD is Gerardo Gonzalez, owner of Lalito – a California – Mexican inspired restaurant on the Lower East Side. Gonzalez has been experimenting with CBD by cooking unique dinners hosted by the cannabis culture magazine, Gossamer. Chef Gonzales says that he originally became interested in CBD oils because he heard it could cure sleep problems. He said that CBD relaxes you and calms your body down which has helped with his insomnia issues and he says it gives a nice flavor to his food.

Another establishment in New York City that’s playing around with CBD oils is Inday, a fast-casual, Indian-inspired establishment with three locations in Manhattan. Soon customers at Inday will have the option to opt for a CBD-infused ghee ‘add-on’ which can be applied to any menu item of choice. The culinary director Viraj Borkar states that ‘the balance of ghee with CBD elevates the flavor, while the CBD acts as a heavy fortification in the sense of calming the mind and the body’. More information here.

If infused coffees are more your style, head over to Brooklyn where there’s been a rise in local coffee shops offering CBD-infused coffee and lattes, especially in the Greenpoint area. We all know hipsters and CBD oils go together like Cheech and Chong (yes, pun intended). Side note, they sell a variety of cannabis products on their website: http://www.cheechandchong.com/, (am I the only one who just found out about this)?  Back to my earlier point, if you’re interested in checking out some CBD coffee shops in the Brooklyn area, check out the full list here.

I finally had a taste of CBD oils myself and was quite impressed. A friend of mine invited me to his ‘Four Twenty Dinner Series’ which took place at his apartment in Tribeca. He was good friends with the host of the evening, a handsome chef that owns a few very successful restaurants in NYC. He knows I would never say ‘no’ to an evening that incorporated one sexy and talented chef, great food, amazing people, and oils that were supposed to give a body high. (I went purely for research purposes, obviously!) Joking! I was counting down the days as soon as I RSVP’d “YES, PLEASE!” Upon arrival guests were handed a seven-course menu that laid out how much CBD oil was in each course. The CBD oil I assure you, was completely tasteless and the food was fantastic. (In case you were wondering, the entire menu consisted of a total of 14mg of oil, which the chef was very meticulous about).

I imagine each person has their own reaction to CBD. I personally was relaxed and felt a little ‘high’ after the dinner and a little giggly, but nothing dramatic. There were a lot of people at the dinner that were in the industry from growers to cannabis consultants. It’s quite the ‘growing’ industry. (More on that later). Overall, it was a great event. The chef says he plans on throwing more events like such in New York City, but only to friends and friends of friends. Who can say no to secretive, ‘invite only’ dinner parties. Hopefully they will get bigger and more ‘bad ass’ as they come! Contact me for more info! 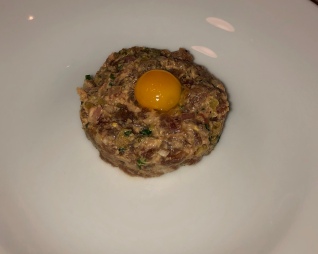 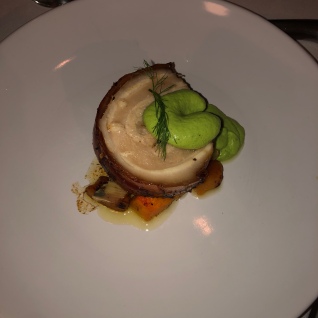 While it’s obvious the use of CBD oils is blowing up in restaurants New York and California, it’s worth noting that in other parts of the country CBD serves as an eye-grabbing ingredient in everything from cocktails to ice cream sundaes, baked goods, and healthy foods like acai bowls and salads. A popular restaurant Zen Barn in Waterbury, Vermont offers CBD salad dressing on its menu and as an ingredient in cocktails. One interesting company new to the market and worth nothing is Kickback Cold Brew, which offers consumers high quality CBS infused beverages made with organic ingredients. Interestingly enough, over 300 brands now offer some form of CBD products and total sales topped $300 million in 2017 – projected to hit $1 billion by 2020 according to the cannabis market research firm Brightfield Group (link).

Has anyone else been to a CBD dinner lately or had any CBD infused products? I would love to hear more about it!

Video from the event: