Remember when going to Miami meant a four-day Charlie Sheen bender in South Beach where you barely knew your name by the time you got on the flight back home? Well, not anymore, (in regard to the South Beach part, the partying is still what Miami is all about)! Miami’s ‘boroughs’ have really taken center stage lately. There’s Brickell, the upscale, fancy, wealthy, business driven section of Miami, with five-star luxury hotels, high-rise office buildings and condos, and super trendy restaurants, which seems to combine ‘NYC’s Meatpacking and the Financial District’; Little Havana, which has tons of amazing hole in the wall Cuban spots, the best ‘Café Con Leche you will ever have’ and has an awesome Latin American sexy vibe to it, sort of like the ‘Flushing, Queens of Miami’; and the Design District, known for its sleek modern architecture, upscale design stores, art galleries, and celebrity restaurants, the ‘Soho of Miami’; and finally Wynwood (my favorite), known for street art, craft breweries and a young, hip crown, which is like a tiny slice of Williamsburg Brooklyn.

Similar to many parts of Brooklyn, Wynwood started as a neglected and decrepit manufacturing district filled with old, abandoned warehouses and dilapidated buildings. It was an area of the city not many people dared to venture out to. Now, old warehouse walls have turned into giant canvases for some of the most talented street and graffiti artists from around the world and streets are often jam packed with tourists. And who can blame them? There is a bar, restaurant, art gallery, boutique clothing store, brewery and trendy coffee shop on every corner. If that isn’t enough, check out Wynwood Yards where they have live music onstage, food trucks and a really cool indoor/outdoor bar. If you are however, looking for suggestions for things to do (and if you love food and culture), definitely check out Miami Culinary Tours. (They currently do tours in all areas of Miami including: Little Havana, South Beach, Wynwood, Design District, Miami City, and Coconut Grove). The Wynwood tour costs $69 (+ tax), takes about 2.5 hours, and includes a wonderful tour guide (Gina is absolutely incredible), lots of food and dessert, and a tour of the murals in Wynwood Yards.

Tours run on Friday, Saturday, Sunday and Monday for Wynwood. The Saturday Wynwood lunch tour started at 12pm and met outside of Wynwood Walls. Sadly, it was a rainy Saturday, but that didn’t stop us! Our tour guide had us congregate inside the Wynwood museum where our tour guide, Gina, started by introducing herself, asking us about ourselves, then about began the discussion about Tony Goldman’s influence on Wynwood. Goldman was a real estate developer and art aficionado originally from New York City, who was known for revamping South Beach and Soho in NYC. He is the one attributed to revamping the abandoned warehouses in Wynwood with a vision of turning the area into one giant art canvas, which is pretty much what he did. Wynwood Walls, a giant outdoor canvas for street artists is one of the most incredible outdoor space in the country. Gina took a few minutes to speak in depth about Tony and the start of this beautiful, funky art district section of Miami, and then came the food portion of the tour…and whew, was there food! 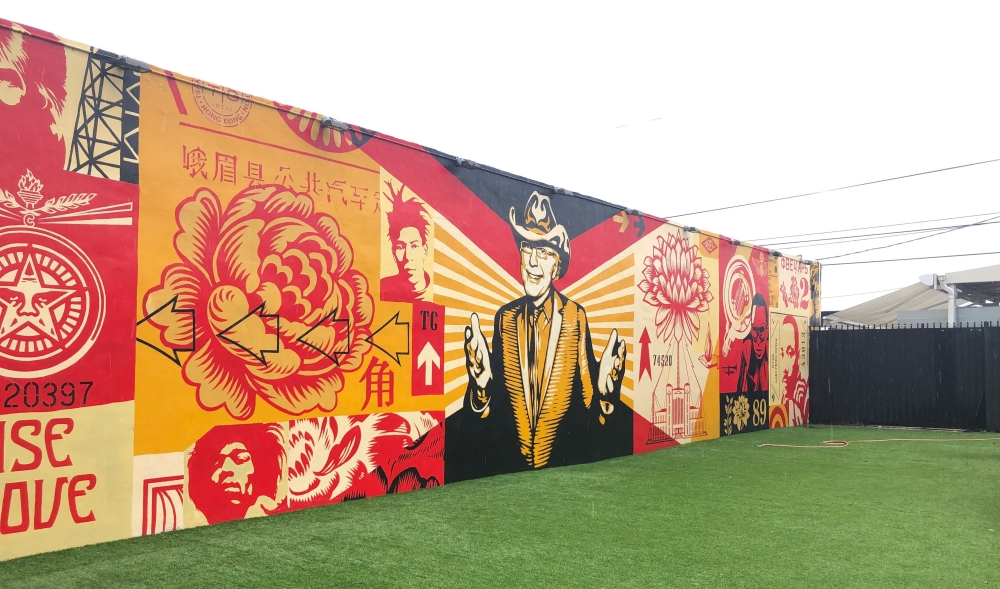 Our first food stop on the tour was Wynwood Kitchen and Bar. As soon as you walk inside this restaurant, you will know why they call it ‘one of the coolest and most visually striking restaurants in the nation’. Floor to ceiling murals are painted in the bar area by Shepard Fairey, the artist who created the famous Obama Hope sticker. Additionally, other spectacular canvases in the dining room were created by the Berlin graffiti spray paint artist, German Artist Christian Awe. It’s almost like eating in a giant, high ceiling funky art gallery. Since the restaurant is considered a ‘tapas bar’ we were offered a selection of small bites from their menu which included, delicious fried chicken empanadas, a tequeno (fried breaded cheese stick made with bread dough and queso blanco) and fried sweet plantains with cheese on top. We also got to taste a sample of a blonde beer from a local brewery. Everything was excellent.

After this stop, we popped into the vegan casual eatery Dr Smood a few blocks away. As soon as we walked into this healthy eatery which can only be described as ‘hipster-esque’, ‘super millennial’, and ‘supermodels in brand new Lulelemon athletics eating only all natural, chemical free, vegan food’, Gina said, ‘we’re going to have a vegan, gluten free, avocado panini. Then she paused and said, ‘now, I know what you’re all thinking, how can a vegan, gluten free sandwich be any good? Don’t groan before you try it, I swear it’s actually really tasty’. She was not lying (and her comment was very on point). I personally believe there’s a little bit of Anthony Bourdain inside of all of us meat eaters. It’s that snobby, how could you live off lentils, vegetables, and tofu mentality? (He used to rip apart vegetarians every second he had the chance to, but I digress). Gina said that they use only organic food and create their own ‘performance bread’ using four ingredients: millet flakes, spelt flour, water and salt, which is supposed to give you energy and not spike your blood sugar. The sandwich was incredible, and they were right, I felt great afterwards. No sugar comedown that white bread tends to bring. Another interesting concept they use in this café is their color-coded system for each menu item. Red – power, pink – beauty, yellow – immunity, green – detox, blue – energy, purple – health. You can choose your food or beverage based on how you’re feeling or what you’re looking to obtain from your food. Although they only have locations in NYC and Miami now, their stores are guaranteed to take off in outdoorsy cities like Denver, Austin and Los Angeles (and beyond!)

From there we moved onto the Peruvian restaurant and tapas bar, GK Bistronomie where we had two courses and a glass of pairing wine. The first course consisted of black grouper ceviche with lime, white corn and corn nuts and two small pork rolls (or a bowl of quinoa for those who opted out of the pork rolls – Bourdain is rolling in his grave as we speak). The dish was spectacular, especially the ceviche where the salt and crunchiness from the corn paired so well with the sour from the lime and the juicy flavors of the marinated fish!  The second course was beef anticuchos (or chicken as a substitute) made with potato fries in spicy cheese sauce (huancaina sauce) and a traditional chimichurri sauce with red peppers on top. This dish was complete flavor overload, cheesy, salty, charcoal, meets fried and slightly sweet. We were also offered a glass of red wine, white wine, or beer to pair with this dish. 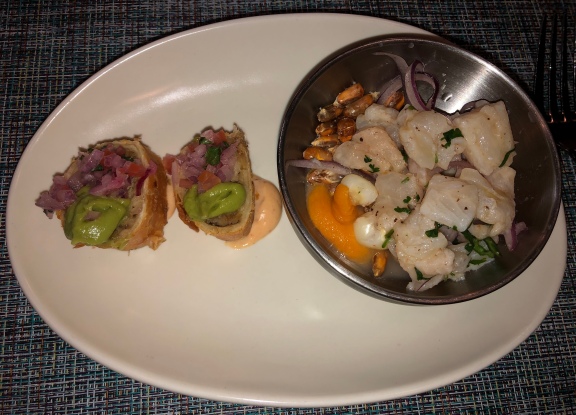 Knowing that we were all in total food coma mode and needed a bit of a break before dessert, Gina walked us around Wynwood Yards and described many of the artists themselves, their murals, and their sources of inspiration. It was incredibly mesmerizing. It’s crazy to think that the murals are torn down at least once a year, they’re so beautiful! My only complaint about this part of the tour is that we didn’t get quite as much walking in as I would have liked, as gelato came soon after and I really thought I was going to explode! Maybe they should include an optional 10-minute sprint around the parameters of Wynwood portion of the tour! 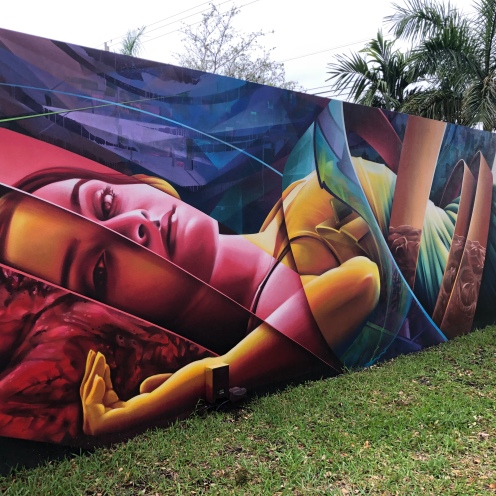 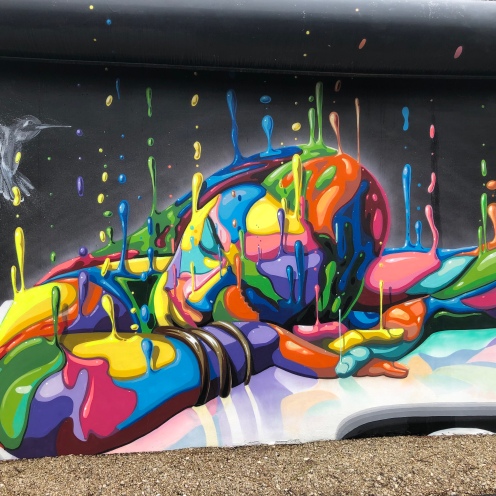 Anyway, as mentioned above, the final stop of the tour was Flavian Gelateria which offers all-natural artisanal gelato made from local dairy and fresh produce. The inside does in fact resemble a small European boutique ice cream shop with wooden finishing’s and gorgeous white marble counter-tops. The shop was located inside a little vestibule which had indoor couches and benches for seating. Perfect for a rainy or sweltering hot day!

Although there were fourteen people on our tour, Gina was excellent at getting everyone together and taking the time to give everyone some needed love and attention. I will definitely check out another one of their tours next time I am in South Florida!

On a final note, if you’re looking for something to do after your food tour, definitely check out some of the awesome breweries they have in the area. Here is TimeOut’s list of best breweries in Wynwood. Veza Sur, their #1 pick was fantastic. Aside from the place being super fun, Latin funky, and perfect for big groups (they have more boardgames than a 1st grade classroom), they also have excellent beers, including their Arroz Con Mango beer which was 10.8% ABV and was fantastic! They also do beer flights, and beer cocktails, and while you’re there, do make sure to have a coffee porter with some real whipped cream. Holy cow is it fantastic! As a cherry on top of the cake, the staff here is super friendly and one of the coolest things about this bar is the fact that they have multiple phone chargers that you can borrow. This is the first time I have ever seen this at a bar. They were actually excited to charge your phone for you. Usually I have to beg a bartender to use an outlet and they get all flustered that I’m wasting their time! I would give this place 5/5 stars just for their portable chargers!