One of the most historic districts of Chicago, which once gave rise to wholesale food markets, warehouses, and meat processors has quickly become one the most happening areas of the windy city. Every weekend, the West Loop becomes jam packed with both tourists and locals alike all looking to chow down on some fantastic food and throw back some amazing cocktails with the best-looking people around. (Think Meatpacking, NYC and Wynwood, Miami!) Like NYC and Miami, it’s hard to find a place in this area that isn’t completely packed on Thursday-Sunday! So, where should one go for an amazing cocktail and some outrageously good food? Well, here are some (personal) suggestions for you next time you’re in town and hopefully money is no option. (Did someone say, ‘client dinner’? Amen.)

Girl & the Goat: If you’ve never heard of Stephanie Izard’s, Girl and the Goat (Little Goat & Duck Duck Goat), you must be living in a cave somewhere (or maybe you’ve never eaten out in Chicago…but still…we’re judging). All joking aside, outside of Grant Achatz, Stephanie Izard is quite possibly the “it” chef of Chicago and Girl & the Goat has been on the list of top restaurants in Chicago since it opened in 2010. It’s been written about in the World’s 50 Best restaurants and won countless awards, including the James Beard Award. No matter what day or time of day you arrive, the place is always packed with a fun and lively crowd and the food is always consistently delicious. Aside from the massive amount of goat meat options, make sure you pile on the veggies here, as they are fantastic. You can’t go wrong with the wood grilled broccoli or the pan fried shishito peppers, but the chickpea fritters, and roasted cauliflower are all outstanding. Basically, order the left side of the menu and let them cart you out in a wheel barrel, we don’t judge! Every dish has such a unique flavor profile, an excellent combination of soft and crunchy, meets slightly crispy from pan searing the veggies just enough to give them a little brownness and a slight crunch. Other favorites here include, the crisp braised pork shank, the confit goat belly and the goat empanadas. 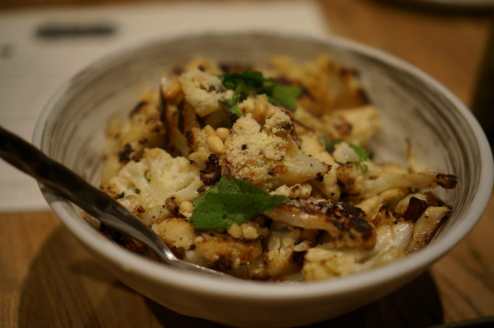 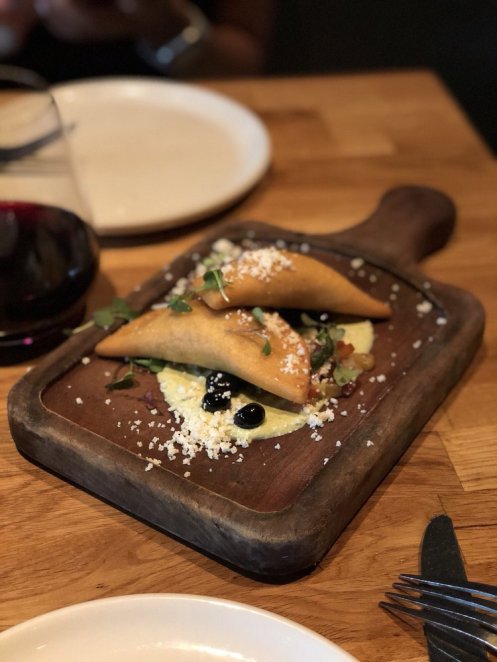 Roister: As Infatuation.com says “if Alinea is haute couture, then Roister is the streetwear collection from the same designer”. Well put my friends. The highlight of this restaurant is the open kitchen is the main attraction and the busying chefs are an integral part of the whole dining experience. Furthermore, in typical Alinea Group fashion, each dish has a combination of flavors that will blow your mind. However, atypical to most of the Alinea Group’s restaurants (Alinea and Aviary mentioned below), (but typical West Loop fashion), Roister is super buzzy and full of energy. If you’re lucky enough to sit at the down at the open kitchen, you’ll be mesmerized in watching the chefs work meticulously to make each dish. Some crowd pleasers include: the oysters with jalapeno (don’t you dare ask for mignonette sauce, they just assume cut your head off); the fois gras (heavenly dish that taste a bit like dessert with the strawberry jam on the side), and the whole chicken & chamomile (fried chicken dish for two). When you see how much work goes into each dish, you can see why it was awarded a Michelin star in 2016-2018. 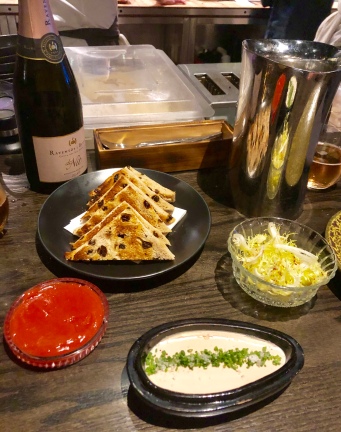 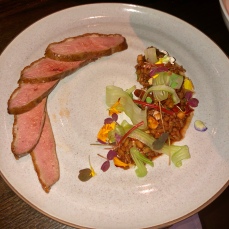 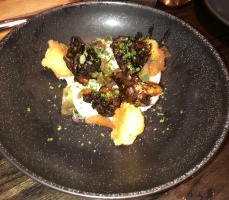 Cabra: As if Girl & the Goat didn’t get her enough notoriety, Stephanie Izard went and opened another restaurant that is just as popular and sexy as Girl and the Goat (is that even possible)?! Cabra, the swanky Peruvian style restaurant is downtown Miami meets Chicago. You’ll honestly be confused as to where you are. First off, it’s in the swanky Hoxton hotel and the line just to get into the restaurant wraps around the place multiple times over. Secondly, once inside you can’t help noticing the ornate floor to ceiling windows, the vibrant use of colors, the decorative plants aligning the bar, the open layout, and the buzzing energy all around. Third, they even have a rooftop pool connected to the restaurant. (For the 30 days of the year Chicago isn’t bone chillingly cold!) The highlight of Cabra is the unique ceviche dishes and the overall funky Japanese-Peruvian marriage of flavors. You must try at least at least one ceviche dish, the avocado dip, multiple tuna dishes, and the smoked goat empanadas (the woman loves her goat meat!) 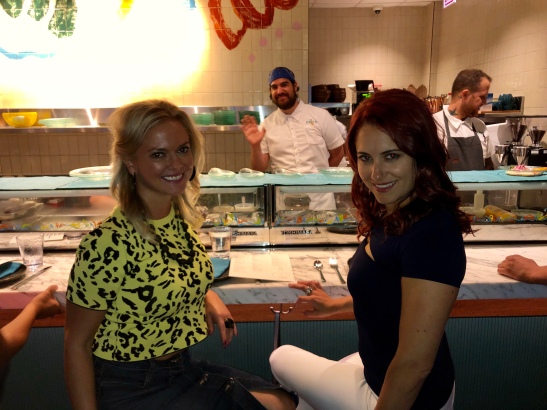 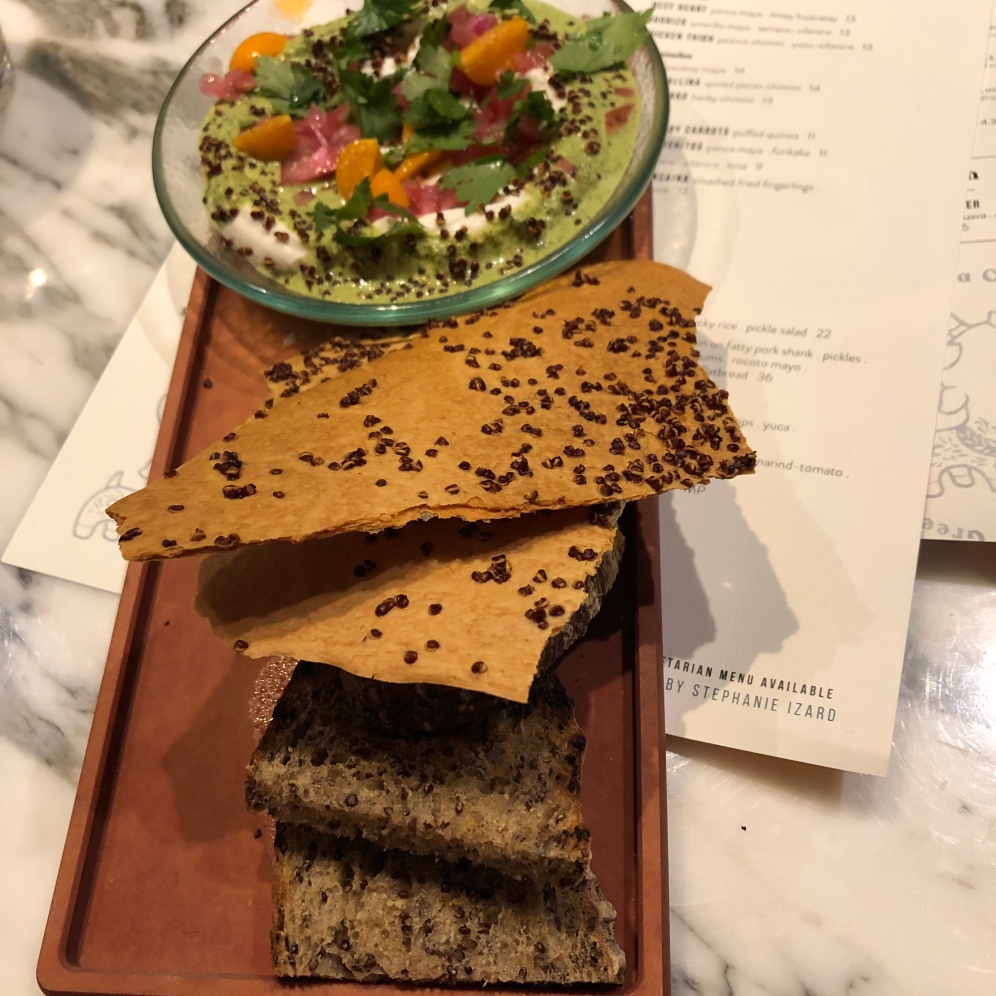 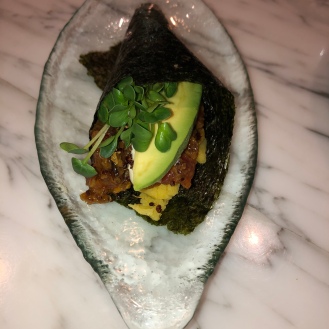 Aviary: The Aviary is the type of place that everyone needs to visit at least once in their lifetime (assuming of course, you are a cocktail person). Yes, the cocktails are a little pricey and yes, they have a ton of booze in them, but trust me, you haven’t had a specialty cocktail until you’ve had one of Aviary’s molecular mixology cocktails. It should be noted, there is giant ‘state of the art’, gated from floor to ceiling, Jetsons like cocktail lab when you walk in. (Remember when science wasn’t cool? Ha!). Between the infused ice cubs, the fake smoke, and the drinks that completely change flavors halfway through, the theatrics are bound to render you speechless. Some of their mot popular drinks include, 20,000 Blueberries Under The Sea, Cereal Killer, and Ain’t Nobody Got Lime for That (do note, these drinks change often or at least, change names often). If you find yourself feeling super buzzy and craving a good old case of the drunk munchies, they do offer a few small bites to coat your stomach. Do yourself a favor an order the truffle explosion. It’s one bite of stuffed pasta, but it’s the best ‘mouth explosion you will ever have’. Trust me. While you’re here it’s almost guaranteed you will see a giant white tower of some crispy, rice cake looking monster on multiple tables…that’s the crispy pork skin and whew, it is delightful. You can also do a food and drink pairing, which is highly suggested. One last note, while there is an Aviary in NYC, the one in Chicago is a bit less pretentious, and a bit swankier, with a younger ‘more hip’ crowd in the Chicago location and of course, a bit less expensive (the three-course cocktail tasting menu with supplements runs about $65). The mood inside is a bit like an upscale Prohibition bar with dim lighting, lots of teacup candles, low, circular, plush couches, and small bar tables to accompany the seating. 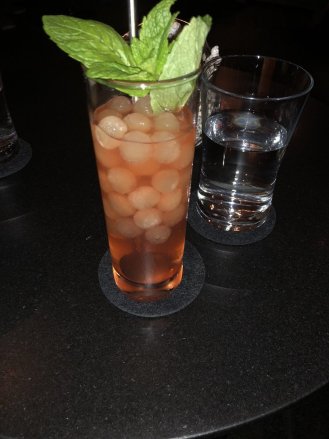 I will shamefully admit, two of these places are owned by the Alinea group and two are run by Stephanie Izzard, so not much branching out here, but hey, they know their stuff! There are however, many other amazing eateries in this part of town!

Where have you been in Chicago? I am always looking for new spots!